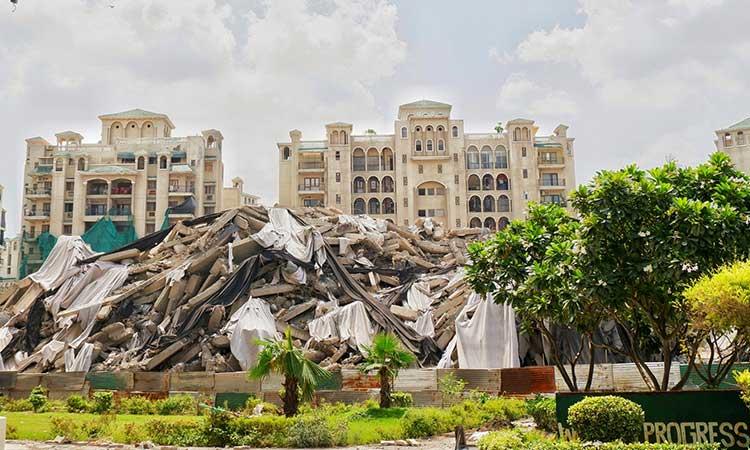 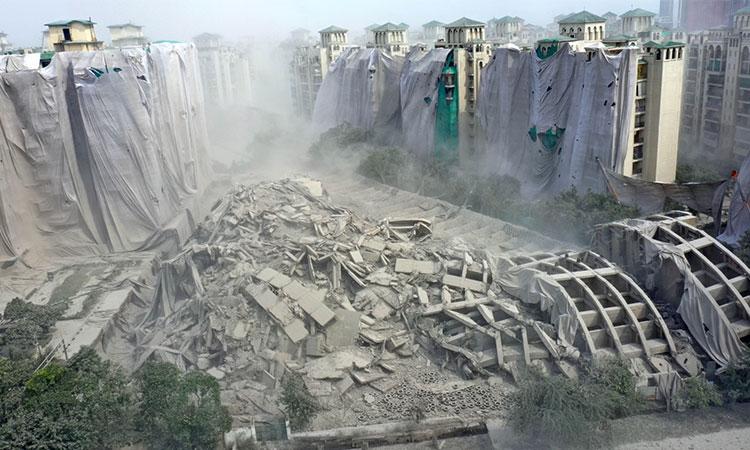 Post twin towers demolition, 45 lakh litres water used to remove dust
IANS - Tuesday , 30 August 2022 | 10 : 07 AM
Sweepers from Noida Authority have been continuously working since Sunday evening to remove the dust and soil in the buildings around the demolished Twin Towers. So far, 450 tankers of water have been used to make neighbouring Supertech Emerald and ATS societies dust-free. The water is also being sprayed using anti-smog guns. According to the information received from the authority, the capacity of a tanker is about 10,000 litres. In such a situation, 45 lakh litres of water has been used so far. 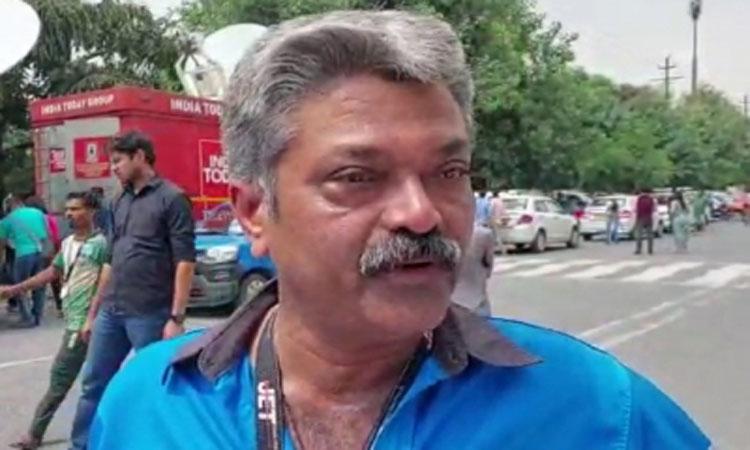 Some damage to ATS Village wall, says twin tower demolition project manager
IANS - Sunday , 28 August 2022 | 04 : 44 PM
Project Manager Mayur Mehta said, "God is great. Everything went all right. Nothing happened to Aster 2 but there has been some damage to the wall of ATS Village. "The dust level is high and is going around in circles." The illegal twin towers of Noida were demolished on Sunday in a nine-second procedure. 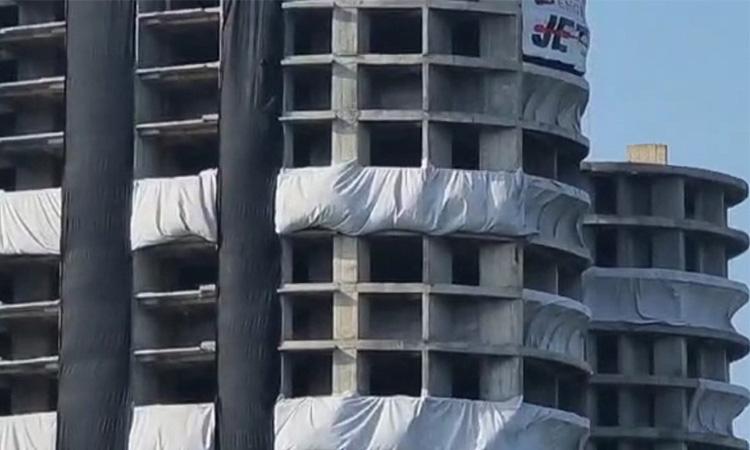 Twin tower demolition: Final touches being given before the blast
IANS - Sunday , 28 August 2022 | 11 : 44 AM
As the preparations enter the last stages for the blast, the officials are making sure they that there are no loose ends and are engaged in re-checking every arrangement. The officials are ensuring no technical fault before the blast. The company has built a wall to prevent falling debris by placing old tyres and iron containers next to the basement of the twin towers. The wall surrounds the towers.
Advertisement 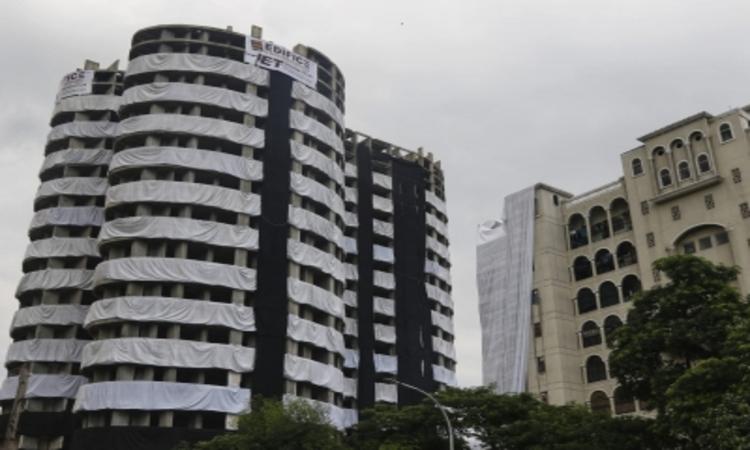 Noida twin tower demolition today, all eyes on it
IANS - Sunday , 28 August 2022 | 10 : 19 AM
The nine second procedure will take place at 2.30 p.m. The residents of the adjacent buildings have moved to safer places. The airspace will be closed for about 30 minutes and surface traffic has also been diverted. Mumbai-based Edifice Engineering has been hired for the project and the button will be pressed by Chetan Dutta. 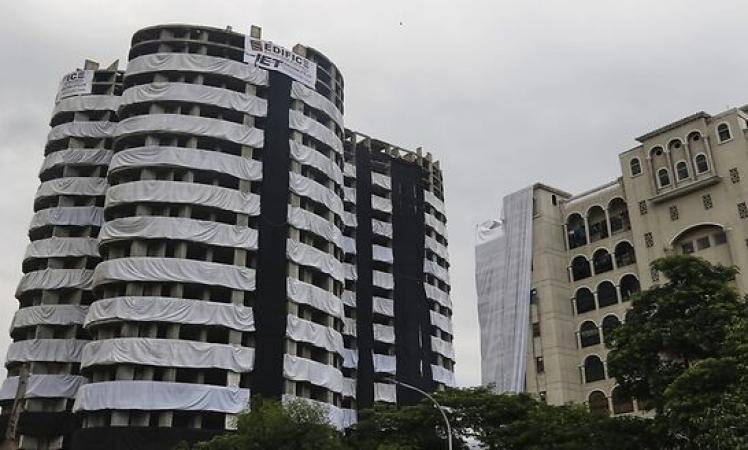 Explained: Noida's Supertech twin towers, a saga of corruption
IANS - Saturday , 27 August 2022 | 09 : 54 PM
The area GH-04 sector 93-A where Supertech got the twin towers 16, 17 built lies in a green belt. If the New Okhla Industrial Development Authority (Noida) wanted it could have changed the land use and allowed the construction of the building as per rules but that was not done. The project was revised thrice for increasing the number of floors. The Floor Area Ratio (FAR) was purchased twice for a total of Rs 23 crore (eight crore for the first time and 15 crore another time). 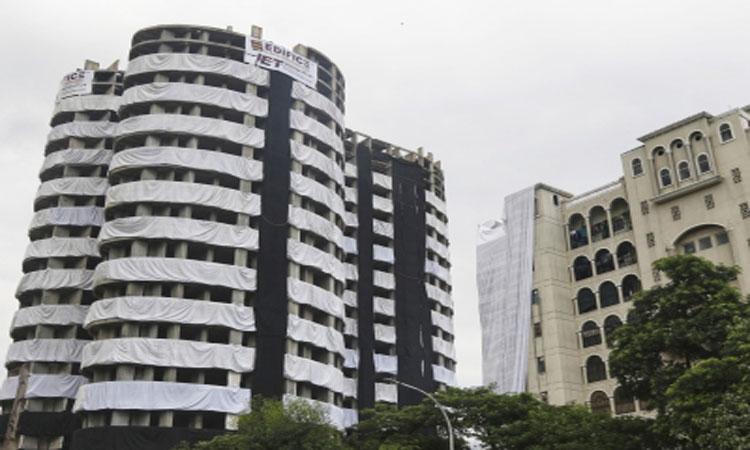 Supertech twin towers demolition: Building strong, built in seismic zone, says Joe Brinkmann
IANS - Friday , 26 August 2022 | 03 : 42 PM
The twin buildings, which comprise 915 flats and are located just nine metres from Emerald Court's Aster-2 apartment block, have been fully rigged with explosives and wired up in August 28. A seven-member team of Jet Demolitions along with Edifice Engineering will bring down the twin towers with a controlled blast at 2.30 p.m. on Sunday (August 28). This will be the tallest towers to be demolished in the country. 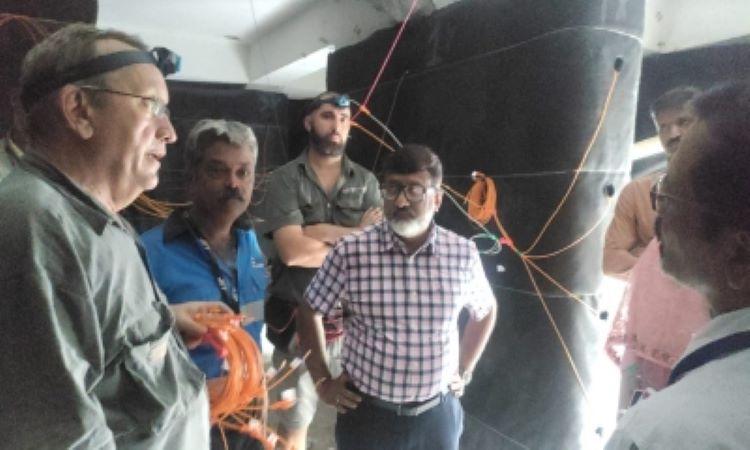 Twin Tower demolition: Explosives loaded in over 9.5K holes
IANS - Thursday , 25 August 2022 | 11 : 14 PM
Noida Authority CEO Ritu Maheshwari visited the site on Thursday and inspected the preparations in the Twin Towers -- Apex (32-storey) and Ceyane (29-storey), comprising 915 flats. She was accompanied by the representatives of Edifice Engineering, the Mumbai-based demolition company that is working on the demolition project along with a seven-member team from South African firm Jet Demolition.
Advertisement
Advertisement